This time I would like to do a “show and tell” on one of my son’s wrecked radio controlled model airplanes.   The model is an EDGE 540 made by Hangar 9.  Early last summer he was flying it at the local flying field and had to make an energency landing on the other side of a nearby cornfield.  Needless to say it didn’t go too well.    The cause of the accident was an engine that wasn’t running correctly and as he was coming in for the final approach to land it the engine quit a little too far away from the landing strip and too close to the ground.  Below are pictures that tell the story better than a bunch of words can.  But, I will mix in a few words just to point out what is going on.

For those of you that may not know what an Edge 540 is, it is a 3D aerobatic model with a 78 inch wingspan.  This one is powered with a Saito 1.80 four cycle engine.  The plane has plenty of power and is capable of the whole range of 3D stunts.  The first pictures are showing the damage that occurred in the crash and it is taken in the shop just before repairs got underway. 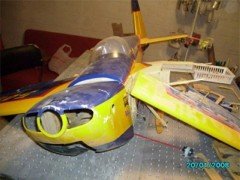 Damage to the cowl, the firewall and the structural members around the firewall.  The left wing is snapped off and shattered next to the fuselage.

Here is another view of the damage to the wing and side of the tank compartment.  Note: the aileron is still attached to the wing.  Not very pretty, but Jeremy says it will be like new again.

The left side of the wing with the leading edge repaired and the badly shattered parts cut out ready for the ribs and center spar.  Also, the aileron has been removed to make it easier to repair the trailing edge.

In a blog entry from last November or December, I talked about what to do after the crash.  One thing I mentioned was to pick up all the pieces of the wreckage.  This is especially important when the model is an ARF or RTF.  In all likelihood you won’t be able to reuse any of the parts but keeping them may help you understand the structure of the aircraft and that can be a big help in the restoration process.  It is not too likely that you will have a copy of the plans and you will need all the help you can get.

He does a nice job and tomorrow I will show you some of the steps he took to reassemble the plane and I will also have some pictures of it when it is all done.  Thanks for checking out my blog and I’ll see you next time.